skip to main | skip to sidebar

Posted by David King at 1:07 PM No comments:

Happenings At The Learning Garden, This Fall

See our newsletter at this link and join us for Pesto Day and MORE! 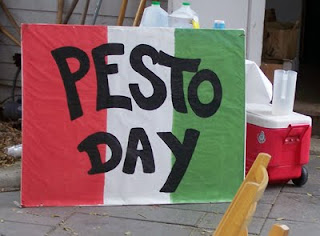 Posted by David King at 2:03 PM No comments:

Posted by David King at 7:05 PM No comments:

The Learning Garden Leads The Way 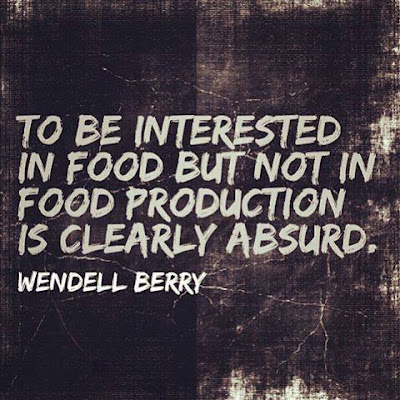 The Learning Garden has been at the forefront of a new movement on how are foods are produced. Borrowing heavily on some fine agricultural traditions (One Straw Revolution; essays by Wendell Berry; several books on soil and biota of the soil) combined with some 50 years of gardening experience, The Learning Garden moved to planting without straight rows from the beginning. The discouragement of straight rows was done on purpose to change perspectives on the plants themselves. A break with the past was needed and we wanted to show everyone, we were not making the old mistakes.

This type of gardening might be called messy, but that is a response to what we grew up knowing of raising food. We thought those straight lines were done for the plants but they no, they suit a human paradigm. Today in the garden, we like how the breaking of straight lines leads us toward breaking up our old ideas about agriculture. The straight lines of the past were done to increase production and the ease of work for the farmer – but that was always predicated on tilling the soil. We don't till the soil (and we strongly urge you not to as well) and automatically, we are free to plant our plants anyway we want and not using rows allows us to fit more plants in per square feet.  The increase in plants helps shade the soil and make the immediate microclimate more forgiving.

We aren't into a clean field – meaning, weeds are tolerated. In fact, in fallow beds we let them grow with impunity. There is nothing worse than bare soil and so we would rather have weeds growing up until the time we plant it.  Furthermore, many of those "weeds" are fantastic forage for insects - and we want more insects not less.  Leaving the weeds to flower - along with our crop plants to flower - provides sustenance for a bee population declining in free fall and for butterflies and birds.  The idea is to have a large insect population to reach homeostasis in the soil.

Instead of tilling the soil, we put out 3 inches of compost in Fall and three more in Spring. This feeds the critters in the soil and they "plow" this material into the soil. Thousands of trips of worms and other critters mix our compost with the soil, feeding themselves in the process and causing vast multiplication of their kin. From this, we get soft loamy soil that absorbs up to 40% more water than unamended soil, with less loss of topsoil. Furthermore, the soil is pliable, soft and easy to plant. The critters in the soil increase the fertility of our soil without adding costly petroleum-based fertilizers and we get the compost for free!

We import large quantities of this material – turning waste products from other households into rich, fertile soil instead of being dumped into land fills. This composted material without tilling actually sequesters carbon in the soil. If farming were to do this kind of agriculture, we would be over 50% on our way to ameliorating the excess carbon in the atmosphere.  (Put another way, the old style of agriculture - that is to say the agriculture from the 1950's to today - is the largest contributor of carbon in our atmosphere! Our little garden does not sequester that much carbon - but it shows the way.)

So, while we don't look like a conventional garden, our way offers a number of benefits:

The benefits we create for ourselves and the world are too important to ignore. In the future, this is what gardening and farming will look like, not so far away. The expense of fossil fuels and their lack of availability is going to increase the price of fertilizers and pesticides to the point that they will no longer be efficient enough to be worthwhile. We will let the insects reach a point of homeostasis where there are no significant losses from insects as they take care of one another. Tilling with fossil fuels will become as rare as hand-writing letters are today. Food will be grown locally and the food miles will be measured in steps.

And carbon will be sequestered in the soil and the soil will once again hold water for a much larger space of time.


We can take a little mess for all this good.

david
Posted by David King at 10:55 PM No comments:

Email ThisBlogThis!Share to TwitterShare to FacebookShare to Pinterest
Labels: carbon, compost, green can waste, homeostasis, leaving weeds, no fertilizer, no spray, no till, sequestering

Notes from the Growing Food In SoCal Lecture Today

The most important tools you use are the different parts of your body – your hands, your skin, your back, your knees and your legs. Chemical sunblock may be bad for your body, but it most certainly does nature no good once you've washed it off. A long sleeved cotton shirt and cotton pants are cool and, if you can find organic cotton that costs less than the US Military budget, you are doing Gaia a good deal. Wear a hat (it's stylish anyway!) and comfortable shoes and your set. Get gloves that will stand to the work you are doing – digging with shovels almost always means a heavy glove, gardening in containers is a piece of cake with cotton gloves or some of the new plasticized gloves. Get more than one pair to fit the different tasks you do in the garden.

A. Stand up gardening/Mulch, Compost moving

H. Almost all kits have


Lee Valley is primarily a Canadian company with some interesting ideas – things you'll NEVER see elsewhere. Some of them have proven really handy while others that I've bought have been duds. This is a catalog you'll mostly look through, wistfully hoping you have a rich uncle who is near death.
http://www.leevalley.com/us/garden/Index.aspx

Gardeners Supply has some good items, I like them. If you see something you like, wait. It will be on sale and will be at a much more reasonable price. Avoid the plastic crap.
http://www.gardeners.com/

Gardener's Edge is owned by AM Leonard, supplier of tools for big horticultural enterprises. Good prices, good tools, many in-house brands that are as good as named brands (or better) for a better price.

Peaceful Valley Farm Supply always carries some good tools, their prices are reasonable, but their shipping can kill any buzz you might get on price. Their website is a nightmare to use – go there, find their phone number and call for a print catalog.
https://www.groworganic.com/

John Jeavon's company has stuff you can't usually find anywhere else, like old-time wooden flats (instead of plastic).
https://www.bountifulgardens.org

Southern Exposure Seed Exchange has small quantities of seed saving supplies – if you play in that field – everything from corn shellers to self-sealing seed envelopes.
http://www.southernexposure.com/

Frost Proof Supply is mainly for professionals, but they have things that are hard to find and they carry a full line of tools. I have found them reasonable. Their website sucks and they don't have a print catalog.
http://frostproof.com/

And I get a lot of my tools and supplies online through eBay, twine, dibbers (from England!), good prices on Haws Watering Can (yes, you can find the FineAsRain roses with the rubber back there too) and service is usually quick.  The drawback is that many of these folks are there to sell sell sell and they really have no concept of the actual product, but, on the other hand, I have bought a LOT of stuff on eBay and I've been less dissatisfied than I have been with companies here in LA where I could walk in the store! Often times there is no such thing as service and eBay is well policed and hats off to their policies that make the consumer really King.

Organic Matter Into The Garden


Those of you who had seen our driveway lately might be kind of shocked to see it so empty.  It took a crew of about 20 people to clear all that compost and wood chips out of our drive and put them all to work in the garden.

More than half went into the high school students' beds raising the level of organic matter by inches.  Organic matter - in this case, compost that wasn't quite finished - is essential for the growth of good plants and it helps the soil sequester carbon - besides making for the sweet yummy stuff gardeners all over the world love to have in their garden!

This work could not have been done without the 20+ volunteers that stepped up for The Learning Garden in the annual Day of Service that is put on by the Agape International Spiritual Center.  We count ourselves privileged to be able to participate year after year because these folks come out with the attitude that they are here to change the world - and they do change ours.

Gardeners know, though it cannot be seen today, the work we did yesterday will be seen by the students when they return in August.  The soil we were able to cover with unfinished compost topped off with wood chips, will be moist and full of life while the areas that remain bare to the elements, will be chalky dry and difficult to work.  The mulched areas will also be more free of weeds.

Our volunteers got the majority of the high school beds covered in one day!  We'll get restocked with material and we'll go at the rest of the beds and try to have the entire high school garden area covered before school starts again.

david
Posted by David King at 4:26 PM No comments: